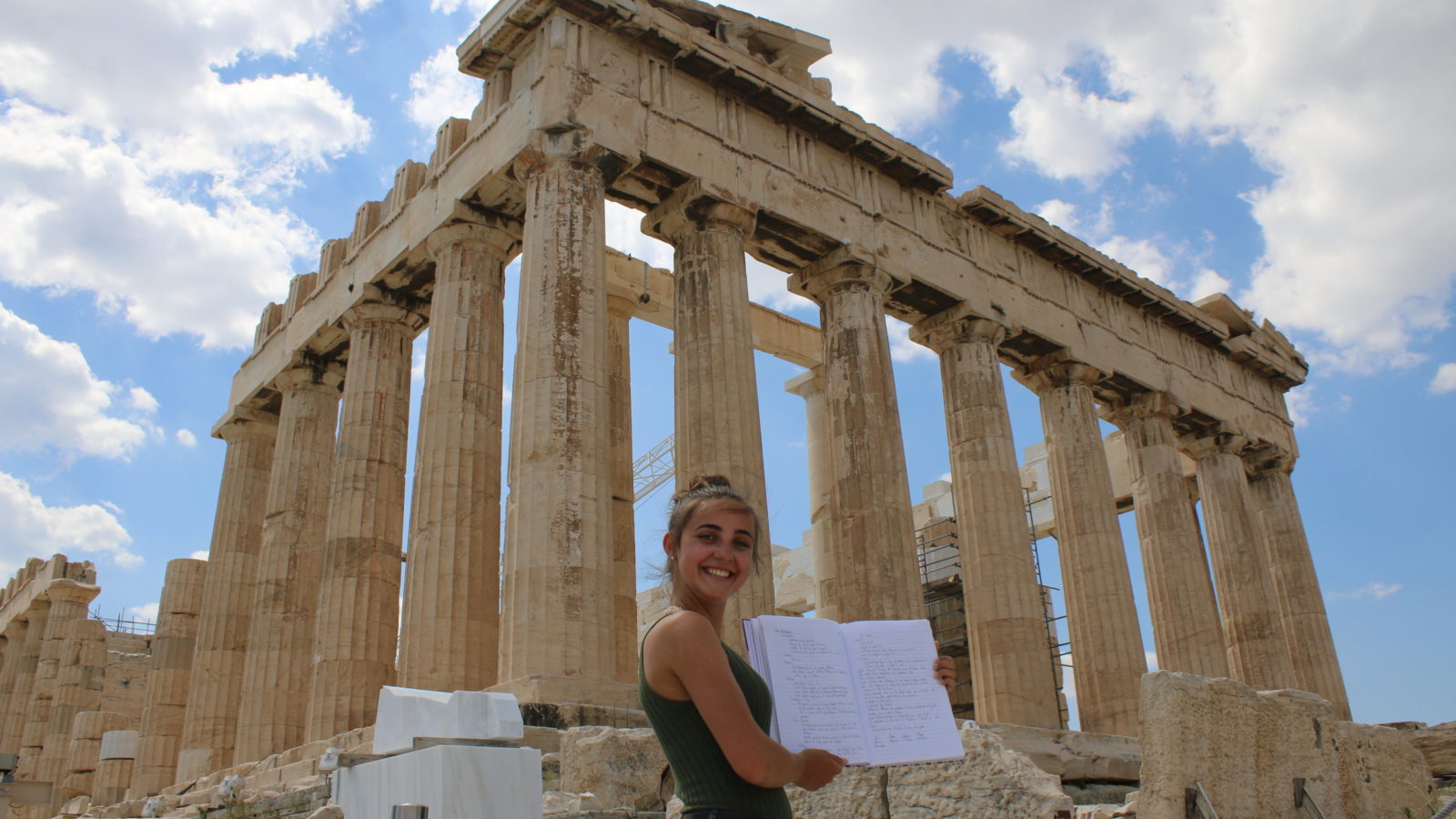 A Classic Twist on Living Abroad

You are here: Home / Blog / A Classic Twist on Living Abroad
by Christina

Art, Craft, and Design; Business Studies; Classical Studies; French; Home Economics; Materials Technology (Wood); Spanish; German; Music; and Technical Graphics – this was the list of subject choices Billy and Brianna got to select from when the entered The High School (yes, the name of their school was literally The High School) this year.  It was a no-brainer for both of them.  Billy selected Materials Technology (Wood) and Technical Graphics, while Brianna selected Home Economics and Art, Craft, and Design.  We purchased the huge T-square for Billy and drawing kit plus textbooks, and Brianna loaded up on a sewing kit, paints, other art supplies and the the necessary textbooks.  As a family, we were really excited about these focused courses Brianna and Billy were taking – especially Home Ec since we are living in Ireland on a food project called Food Evolutions.

You can only imagine our surprise when Brianna came home on the 1st day of school and informed us that she wasn’t able to do Home Ec because she wasn’t prepared.  I can remember stealing a look at Bill across the kitchen and having that secret conversation of “what does she mean she can’t take the course?”  Definitely not the way we wanted her first day to go.  Well, Brianna wasn’t as fired up as we were because she said she entered class and the students were working on embroidering a pillow and she can’t even sew a button!  Clearly they were far ahead of her and not just learning the basics. (Just an aside – subjects are selected in the 1st year and then students take that subject for 3 years and have a huge exam called the Junior Certificate at the end of the 3 years.  Brianna entered The High School in the 3rd year, so to be fair, all these students had been learning Home Ec for two years already so she would be starting off very far behind.  We understand that now, but this was very hard to hear back in September).

We then had to pick another subject for Brianna.  She loves to sing so naturally Music was her next choice.  Then she was asked by the teacher if she could read music . . . awkward pause . . . “no,” she replied.  We were told that that one is not going to work either because a student needs to read music when entering music in 3rd year.  So during her 1st week of school, the girl who has never gotten less than an ‘A’ in her academic career was told twice that she wasn’t prepared for a course. This was NOT how we wanted the school year to start out.  So we asked – calmly I might add – what class can Brianna pick-up and assimilate into for the 3rd year and the answer was surprising and not on our radar at all – Classics.

Fast forward to October and stories about Classics starting popping up at the dinner table. Brianna compared her class to the characters on the Big Bang Theory (just happened to be the show our family was binge watching on Netflix together at night).  There were only 4 people in the class – 3 boys and her.  She was Penny.  She was the one trying to fit into their Classics World.

Jump ahead to Christmas.  Mr. Milofsky, Brianna’s Classic’s teacher, was a routine name at the dinner table and every night brought a new tale of the antics and comments from Classics that day.  I felt like I knew each of the boys personally in Brianna’s class because she spoke of them so often with enthusiasm and genuine affection. And then the stories started. Not just the stories about what the boys said in class but the stories about Classics.  Our evening meals were punctuated with tales of who married who, who defeated who – all in the Greek world – it was like a soap opera! All the while, Brianna’s enthusiasm for the subject that we never would have selected for her to take was growing by the day.

I mentioned earlier that in 3rd Year students take exams at the end of this 3 year cycle called Junior Certificate.  In preparation for this high-stake tests, they give “Mock Mock exams” in March.  Even though Brianna wasn’t sitting for the Junior Cert in June, Mr. Milofsky asked her to take the Mock Mock exam and she hesitantly agreed.  Not knowing what to expect, we were definitely nervous for her and I think she was pretty nervous too . . . she had quite a competitive class.  Brianna came home after the exam feeling confident but nervous to find out her results.  We were shocked to hear that the entire test was essay or short answer – not one multiple choice question!  This was definitely an interesting change from testing in the states.

The next day, Brianna sprang through the front door cluching her Mock Mock Exam in her hand.  She was bursting with pride to show us her score, but more importantly the comments that Mr. Milofsky wrote.  Our girl, who had no background in Classics, scored a 160/160 on the exam!

Classics lit a spark in Brianna that we had never seen before.  Was it the instructional style of her teacher, Mr. Milofsky? Was it the antics of the 3 boys in class?  Was it the detailed daily discussions? Was it the fact that there were no worksheets (BTW – no classes gave out worksheets)? Was it the small class size? Probably it was a combination of all these factors, but Classics became the academic highlight of Brianna’s 3rd Year and it was all because she “couldn’t do” Home Ec or Music.  What a twist!

Making It All Come Alive in Athens

We know have been blessed beyond belief with all the opportunities our family experienced this year.  Traveling the world while having Ireland as a home-base was beyond our wildest dreams and we tried to literally make the most of every moment.  We didn’t stop.  We crammed as much as we could into each day and will always treasure the memories we made and over 44,000 photos we took! So when a last trip to Italy and Crete was in the works, it was only naturally to try and sneak in a layover to Athens on our way to Crete!

With the help of KIWI, I was able to find a flight from Dublin to southern Italy where Bill was doing more research at The Italian Culinary Institute.  We then rented a car and took the ferry to Sicily so he could continue his cheese research.  From Palermo, it would have been a quick flight to Athens, but to get the cheapest rate (5 people flying is expensive) we flew to Nuremburg, Germany and then back down to Athens for 2 nights before landing in Crete for a holiday with our dear friend Jason, O’Brien and 40 of his closest friends to participate in the Bronzeman.  We could have just gone from Italy to Crete but there was no way we could miss a trip to Athens after hearing about Classics every night at the dinner table!

It was one thing to see Brianna’s enthusiasm for Classics come alive at the dinner table, but she literally lit up as our personal tour guide in Athens.  Armed with her Classics notebook, yes, that’s right folks – Brianna carried her Classics notebook with us through southern Italy into Sicily and then to Athens so she could read up as we went along.  Better yet, she wanted a picture with the correct page of her notebook in front of all the buildings she learned about.  As we walked around the Acropolis, she told us tales of the people who built the structures, highlighted architectural elements of the ruins, explained the importance of the buildings, and truthfully blew my mind with how she remembered names, dates, battles, buildings, etc.  She literally was a walking Greek Encyclopedia and she had a permanent smile on her face as she walked around the ruins she had been learning about all year.

As an educator, my heart filled with pride for the deep educational experience Brianna had in the classroom with Mr. Milofsky.  If it wasn’t for his own love of the content that he clearly translated to his students, then Brianna would not have been bitten by the classics’ bug.  The format of his classroom allowed for a deep synthesis of information, open discussions, and of course some comical relief.   Thanks to Mr. Milofsky, Brianna was armed with an abundant amount of knowledge as we walked around Athens and then up the steps to the Acropolis.

As a parent, my heart swelled with pride as I watched her carry her Classics notebook across Athens stopping at every monument for a picture.  She carefully flipped to the correct page, waited for the crowds to slip away and smiled a huge grin infront of 15+ buildings.  In between pictures, she enlightened us on everything from ancient architecture to affairs – what a crazy time it was! To see her make connections and have the content come alive was priceless. Now I can only wonder how her love of classics will impact her future career path!?

Ireland is my Classics

For me, this experience perfectly captures the feelings I have about living abroad this year.  Ireland was my Classics Class.  I was fine playing it safe back in Maryland and getting up everyday to go to work, then shuffle the kids to sports and activities.  Maryland was like taking Home Ec or Music for me – it was safe.  Then the opportunity to move to Ireland for the year for Bill’s sabbatical popped up last fall.  The idea was so foreign and outside anything I had ever considered, my first reaction was “how could we possibly move abroad?” It was very similar to Brianna’s reaction when she was presented with taking Classics as her subject choice.  But we all made the leap from renting our house, taking a leave of absence, emmersing ourselves in Irish life, and taking courses outside our comfort zone.  As much as Brianna came home every night and spoke about the happenings in Classics, I know we will be talking every night about our happenings in Ireland.  Just like she wanted a picture with every monument in Athens with her notebook, we wanted to capture every magical adventure abroad and right now that amounts to over 44,000 photos and counting 😉  Just like we have NO idea how taking Classics will impact Brianna’s future, we have no idea how living abroad for a year will impact ours.

But what I can confidently say I do know:

What more could we possibly ask for?

Finding Connections in Kenya . . . . in the Most Unlikely Way
Next Post: Sold Out: Urban Foraging Foray and Cooking Class with Dr. Bill Schindler