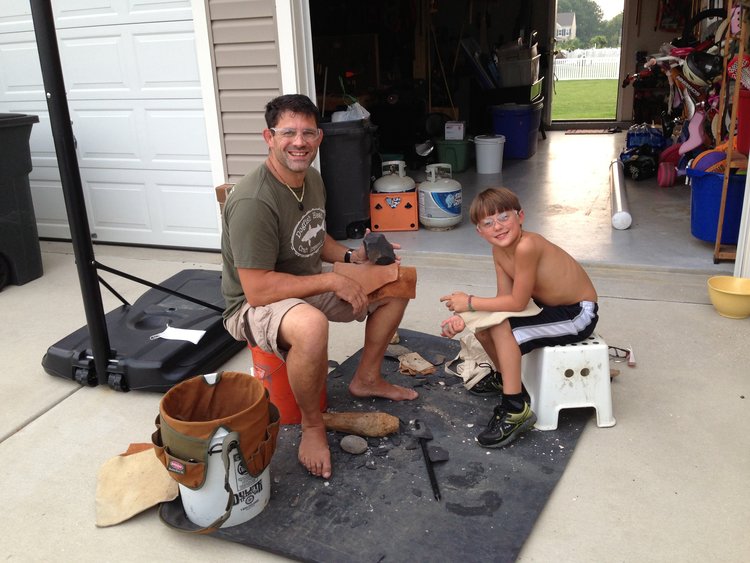 From Flintknapping to Ravioli Creations

You are here: Home / Blog / From Flintknapping to Ravioli Creations
by Christina

For some father and sons, quality time means watching Sunday football games. For others, it might be heading to the park to throw the ball around. Where we live on the eastern shore of Maryland, typical father/son bonding moments occur in goose pits and tree stands in the wee hours of the morning or just as the sky is getting dark.  My two guys definitely fit into this last category (Oh and I forgot to mention that wearing camo is a requirement too!). For the past 7 years, I have watched their relationship deepen as they spent more time in these quiet and tranquil environments. Before that, their time together was spent building projects in the garage, flintknapping in the driveway, and you could always find them across the street shooting a bow!

You see my husband, Bill, has been an archaeology professor for 12 years now – just as long as Little Billy has been alive.

Being in the “teacher” role, it was just natural for Bill to come home and “teach” our kids.

THEY WERE ALL FLINTKNAPPING AND SHOOTING A BOW AT A VERY YOUNG AGE!

Over the past five years, Bill’s research has evolved to focus on ancient foodways and how the archaeological record impacts our human diet. During this academic evolution, he wanted to combine his understanding of ancestral diets, by learning from the top chefs around the world to make prehistoric foodways meaningful to modern life.

IN OTHER WORDS – HE WANTED TO MAKE REAL, NUTRIENT-DENSE FOOD THAT PEOPLE WOULD ACTUALLY EAT AND NOT GAG/GET-SQUIMISH OVER.  CAN YOU SAY VENISON HEART TARTAR???

After years of being out of a college classroom as a student, Bill was back learning in that student role, but not in a traditional higher education setting. Instead the kitchen became his classroom. From learning at the Nordic Food Lab in Copenhagen to taking a traditional cheese-making course with David Asher in Iceland, Bill has literally traveled the world to learn from some of the top chefs about cooking in traditional manners. Truthfully – that’s what this year abroad is all about for us!

It was just a year ago that Bill took a charcuterie making class with Chef John Nocita from the Italian Culinary Institute. As soon as he came home, you can imagine what our kitchen looked like! He was now on a mission to create every type of charcuterie he learned about . . .  in our own home. Oh my . . . this recovering vegetarian has certainly come a looooonnnngggg way!!

But, what was different, was that Bill evolved from being a student at all these amazing kitchens around the world to now being a teacher of traditional cuisine in the states. Not only were his students at Washington College his learners, but so were our children (or when it comes to the meat things – definitely more our son!).

Food is something we can all connect over.

It is something that we can all enjoy together.  From cracking the eggs to make homemade pasta to measuring ingredients for pancake breakfasts to sautéeing squid to make homemade calamari, our kids are all entrenched in the kitchen.  You can imagine they all have their favorite things to cook.

ALYSSA IS THE PANCAKE AND CHOCOLATE CHIP COOKIE MASTER!
JUST LOVE HER OPPOSITE NIGHT DINNERS!

BRIANNA IS A TRUE BAKER.  SHE CAN BAKE, ICE, DECORATE AND PLATE, ANY SUGARY CONCOCTION.

BILLY ON THE OTHER HAND IS OUR SAVORY CHEF.
HOMEMADE PASTA OR MEAT AND SEAFOOD DISHES ARE HIS SPECIALITIES!

The impact on our family from Bill’s food research hit me head on tonight.

As I walked out the door to bring Alyssa to camogie practice, Billy was busy rolling out fresh pasta. This was after he spent last night with his Dad making a homemade beet root purée, as well as a parsnip purée. Tonight, he was surrounded by a mess of cookie cutters, scraps of dough and if you walked into our kitchen you would’ve instantly started thinking he was baking cookies of various circle sizes because of the cutters. You couldn’t be more wrong though!

Both my guys were in the kitchen laughing, telling stories and moving seamlessly around one another as they crafted a gourmet meal on a random Wednesday night.  That’s what I really want to highlight here – the connection my two Billy’s share.  In the past, they really bonded over the outdoors, hunting, fishing and projects around the house.  That still holds true, but now their connection has evolved into a culinary craft that our entire family is benefiting from every night around the dinner table!

From Student to Teacher through Gourmet Raviolis

You see Bill was at the Italian Culinary Institute last week where he was teaching the master chefs a three-day workshop on ancestral diets/foodways. While he was there, he was able to participate in parts of the training, where Chef John taught the master chefs everything from olive oil tasting to traditional pasta-making. Chef John and one of his instructors, Alessandro, modeled some very unique pasta-making techniques that inspired Bill to try them in own kitchen in Ireland with his sous chef, our son Billy, by his side.

Tonight’s dinner was the delicious result of their culinary connection with raviolis. I must admit that I was jealous of the stories they would share about times in the tree stand and those great deer stalks through the dusk, but this – this delicious food – was something we all could understand, we all could enjoy and it created a memory for every. single. one. of us around the dinner table.

Take a lesson from us because it has taken me waaaaaaayyyyy to long to realize this.  The moments that we will remember, cost pennies if they actually cost anything at all.

THE REAL VALUE IS IN THE MOMENTS SHARED AND THE MEMORIES MADE.

A Half Day Every Wednesday??
Next Post: Food Evolutions Research Shared with Bord Bia