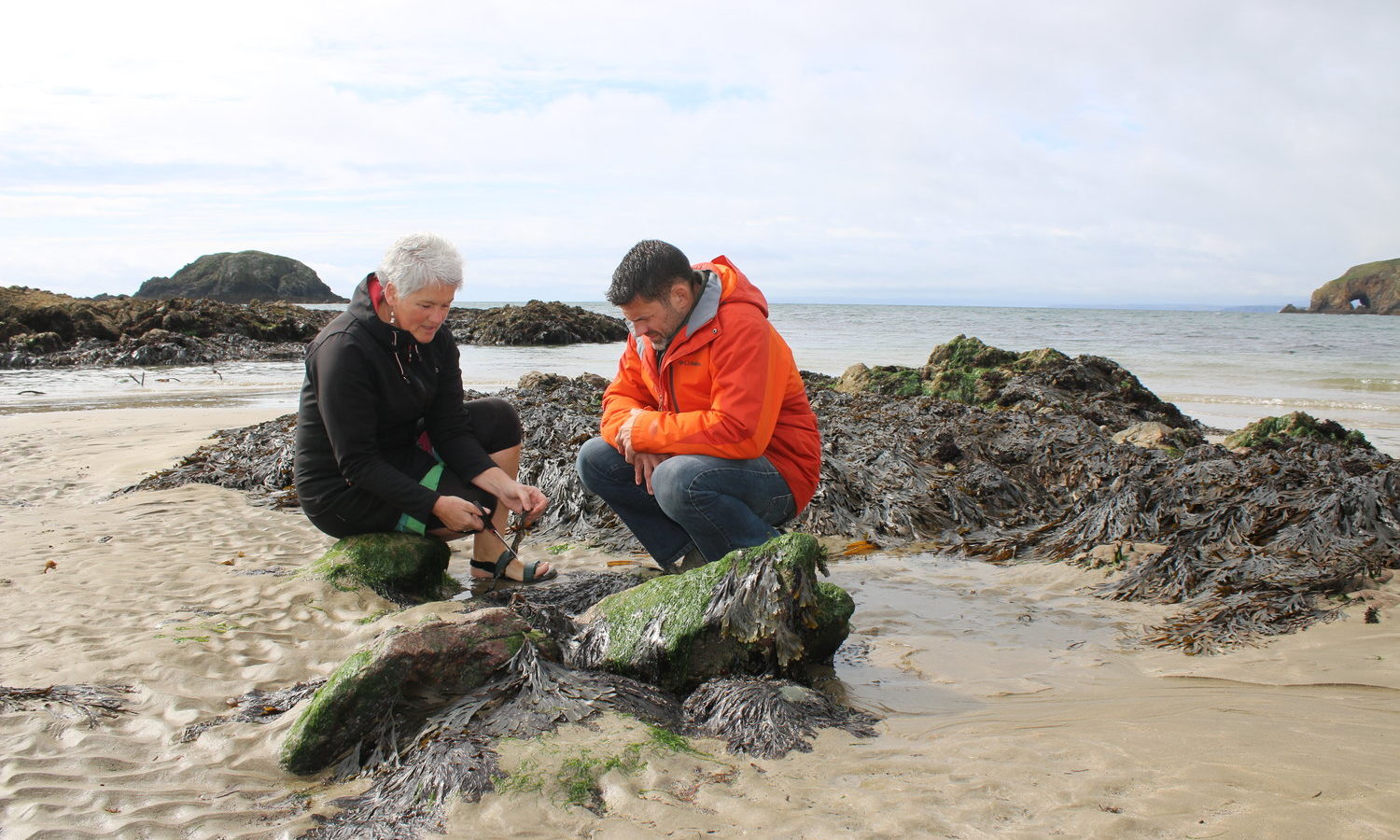 You are here: Home / Blog / Sea Foraging with Marie Power, The Sea Gardener
by Bill

This morning Christina and I made sure the kids were settled at their schools and rushed as quickly as possible to County Waterford located on the southeast coast of Ireland to meet Marie Power.  The drive to the town of Tramore (Trá Mhór, Irish for Big Strand) where we were meeting Marie is a full two and a half hours away and we wanted to make the most of the time we had.

One of my professional development priorities for the year is to learn the best practices for seaweed foraging and cooking and, since Ireland has a long tradition of seaweed harvesting and consumption, I am confident that this is the place to learn.  And, it turns out that Marie Power is the forager to learn from!

I grew up 5 miles from the Atlantic Ocean and spent a lot of time at the beach.  I have been foraging since I was 10 years old, but it was all focused on land based plants.  I never learned how to forage for seaweed nor did I even consider seaweed a viable wild vegetable.  The Jersey Shore is made up of Sandy Beaches and, since seaweed anchors itself to rocks the only seaweed I was exposed to was dead, washed up on shore and rotting and covered in flies.  This is my opportunity to fill in the gap in my foraging knowledge and I am so excited to get started!

The workshop started in the parking lot as soon as we parked and began to unload.  Marie is a talented educator and, even as we unpacked the backpacks and cooking equipment from the cars, she immediately began to teach.  From the vantage point of the parking lot she was describing the geography and geology of the area.  As we walked onto the beach we paused at the sign depicting the water testing results for the past year and we learned how important water quality is to safely harvesting seaweed.

After stashing the cooking equipment in a safe spot, covering it with an umbrella to keep it dry in case of rain, Marie pulled out the tidal chart she brought with her and explained the relationships between the moon and tides, how to read the chart, and that the best time to begin foraging is one hour before low tide.  She then began to discuss shoreline ecology and the different zones where seaweed exists.  It was only then, after she laid the groundwork, that we began to forage.

Sustainable seaweed harvesting is species specific, however, some things are almost givens such as never harvesting more than half of a given plant (1/3 is even better).  Sustainable harvesting is very important to Marie and the manner in which she approaches foraging is most likely why she is known as the Sea Gardner – she “tends” the her seaweed in two very important ways:

As we foraged with Marie we identified, learned about, sampled, and harvested about 18 different edible seaweeds including:

Then the cooking began….

Marie mixed together oats, laver and caramelized onions, formed them into small “cakes” and began to cook then in the pan.  As the Laver Bread, a traditional Welsh dish, cooked, Christina sampled some of the food she made ahead of time to share with us including beetroot and dilisk bread and hummus with seaweed.  After the laver bread was finished, Marie prepared a miso soup and incorporated samples of the seaweed we collected along with some samphire and wild garlic she brought with her.  Then, she showed us how to properly use the carrageen.  Carrageen is an amazing thickener and can be used to make a variety of desserts.  Since we did not have the time to produce a dessert start to finish, Marie used the carrageen to produce a traditional tea that Marie swears will cure coughs, colds and congestion (see her website for directions).  As the clouds rolled in and the wind picked up we sweetened the warm, full-bodied tea with elderflower cordial – it was the perfect end to an amazing day of foraging.

We packed up and loaded the cars, bought a copy of Marie’s seaweed foraging book (and she signed it!), said goodbye, and started our 2 ½ hour drive home to meet the kids.

There is no doubt that we will be working with Marie again in the future!