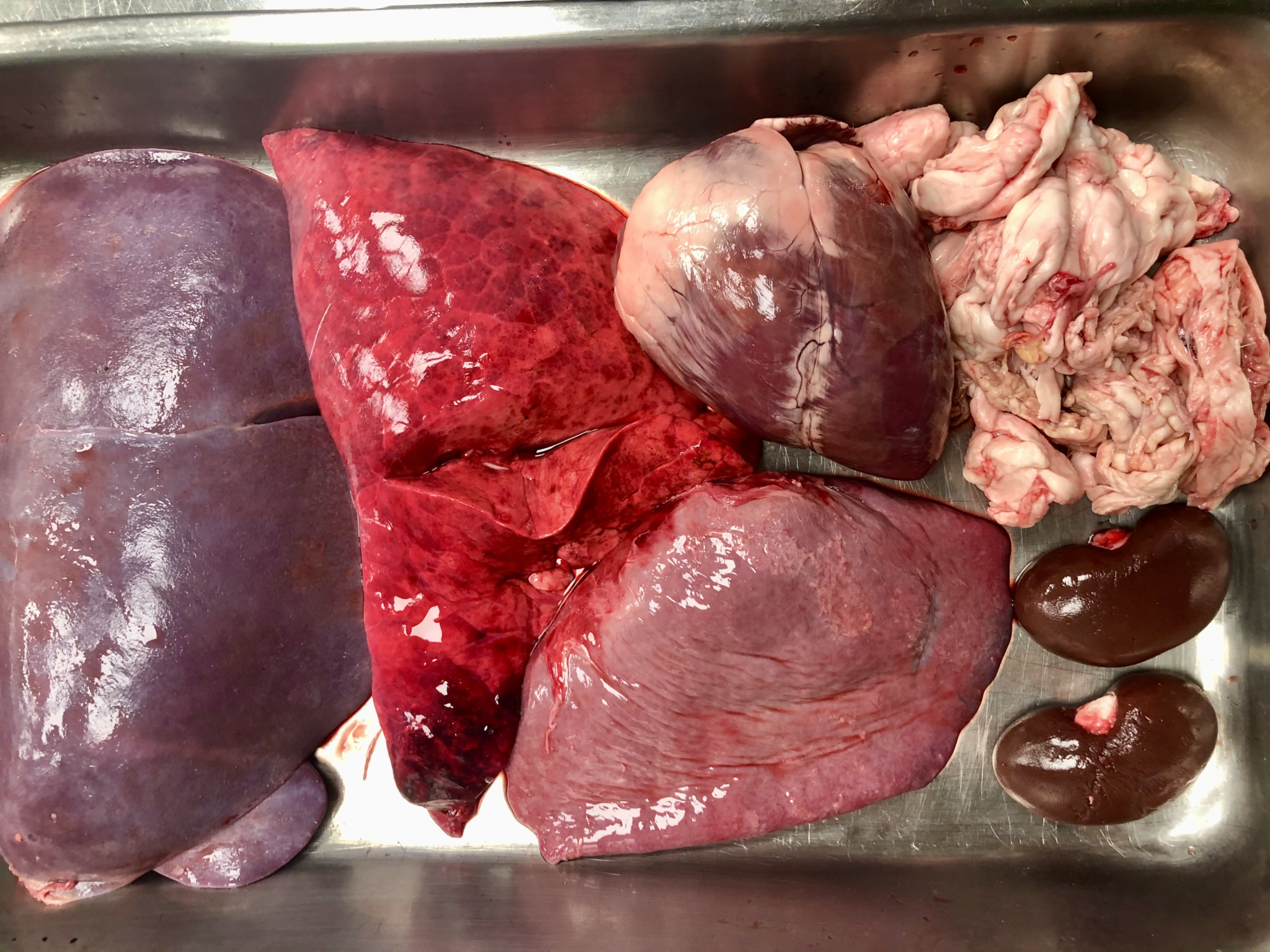 Toward a More Nourishing, Ethical and Sustainable Approach to Hunting

You are here: Home / Blog / Toward a More Nourishing, Ethical and Sustainable Approach to Hunting
by Bill

Well, more accurately, I eat animals since we practice nose-to-tail butchering, cooking and eating in our home and include more than just the meat from animals in our diet.

In fact, I love to hunt and want to do everything I can to help preserve our access to hunting far into the future.  And, that is why I wrote this article.  I firmly believe that we can all do a better job to ensure that we are hunting (and field dressing, butchering, cooking and eating) in the safest, most nourishing, ethical, and sustainable ways possible.  After all, let us not forget that a successful hunt means taking a life and with that comes tremendous responsibility.

What I am talking about is making the most of your quarry – in every possible way.  By adopting a few simple practices we can increase the amount of food and nutritional value each animal we harvest can provide, connect more closely with our food, and ensure that what we are doing is as ethical and sustainable as possible.  Sure, this requires the investment of a little extra time and forces us to hone our skills, but I can promise it is an exciting and worthwhile journey.

The long, long (pre)history of hunting

First, a little background.  Hunting has been a part of our history for almost 2 million years.  In fact, our ancestor’s ability to hunt and the incredible nutrition it provided played a significant role in fueling the massive body and brain growth that eventually resulted in the creation of our species, modern day Homo sapiens.

The very reason you are sitting there with a brain capable of reading these words is because our ancestors figured out how to hunt almost 2 million years ago! If you are anything like me, one of the reasons that you love hunting is because it connects us to that very deep primal past. However, the way our ancestors approached hunting and what it meant for their diets is very different than today. Those differences have profound consequences for the nutritional return as well as the ethical and sustainable aspects of what we as hunters do.

The archaeological record illustrates that we introduced meat into our diets almost three and a half million years ago when our ancestors invented the first stone tool technology.  We have found the butchered remains of animals along with the stone tools used to butcher them dating to this era.  Those ancestors weren’t hunting that long ago, rather the tools they made then merely allowed them to scavenge the remains of kills made by other predators on the African savannah.

Then, and now, when predators make a kill, they typically gorge themselves on the parts of the animals that pack the biggest nutritional punch – the blood, fat and organs – often leaving a flesh covered carcass behind for scavengers to dine on.  Armed with their razor sharp stone blades, our tool making ancestors joined the ranks of other scavengers and hacked off hunks of meat to eat.  What is interesting about the difference introducing meat made to our evolutionary tract is that it really didn’t do much of anything.  Our bodies and brains did not grow much as a result.

It wasn’t about the meat – it was always about the animal!

The biggest jump in brain size took place a million and a half years later and coincided with the development of two very important technologies – fire and hunting.  At two million years ago the control of fire allowed our ancestors to cook their food, provided warmth and light and was no doubt incredibly important.  But, it is the hunting that I want to focus on here.  You might wonder what the nutritional difference is between scavenging and hunting – well, it is huge!!!

When you scavenge, you only have access to what is left after a predator finishes its post-kill meal – usually just meat.  When you hunt, you become the predator and therefore have first access to the entire animal providing the opportunity to dine on anything you want – this includes the offal along with the meat.  Consuming the entire animal provides a multitude of benefits and provides the safest, most nutrient dense and bioavailable food we humans have ever had access to.  Hunting coupled with nose to tail butchering, cooking and eating literally fueled our evolution.

Offal, or the fifth quarter

Offal, which includes blood, fat, brains, tongue, and organs such as liver, heart, kidneys, intestines, bones, connective tissue, skin, feet and spleen, offer a ton of nutrients far exceeding what meat alone can provide.  We are talking about high quality protein and fat as well as numerous vitamins such as the B-vitamins, fat-soluble vitamins like A, D, E and K and minerals such as iron, magnesium, selenium and zinc. Offal even contains vitamin C!  This is all in addition to high quality fat and protein. In fact, liver is one of the most nutrient dense foods on the planet!

The manner in which our ancestors approached hunting for almost the entirety of 2 million years was intimately connective (they were are a part of the entire process from harvesting, to butchering, to cooking to consumption/nourishing their families), and, because there were doing so using a complete nose to tail approach they received the maximum amount of nourishment each of the animals they harvested had to offer.  These practices were, by default, as ethical and sustainable as they could possibly be.

Whether or not we butcher our game ourselves or bring them to a processing facility, how much of each animal do we really keep and eat?

If you kept all the meat (which as you know is incredibly hard work and is rarely ever accomplished to its maximum potential) then you would be keeping, by weight, only about half of the animal.

And, since meat is less nutrient dense and bioavailable than the offal, you are actually limiting yourself to accessing less than half of the nutrition the animal could provide!  Think about this – you can more than double the amount of nutrition and drastically improve the quality of what you eat simply by butchering and cooking a little differently.

Stop focusing on just the meat.

Meat is delicious and nourishing, but it is the least nutrient dense part of the animal.  The real nutritional impact of what an animal can offer us comes from the blood, fat and organs.  This may sound overwhelming, I know. I am suggesting you do things differently than your father or grandfather taught you.  But, it may provide some comfort in knowing that it is exactly what your great, great, great, great grandfathers (and grandmothers) were doing.  Somewhere along the way it just got lost. By adopting a stronger nose to tail approach you will be honoring the animal in the best possible way and laying the foundation for justifying hunting as a worthwhile and important activity to anyone attacking it on the grounds it is not nutritious, ethical or sustainable.  Plus, you and your family will most definitely be healthier because of it!

Too big of a step back…

Stepping back in time to hunt for our food and eat like our ancestors did is a great idea – as long as it is not too far back. Consuming only the meat of animals is similar to the 3.5 mya diets that nutritionally supported our small brained and small bodied Australopithecine ancestors.  It is not suitable for us modern day Homo sapiens with our significantly higher nutritional needs!  Instead, we should attempt to replicate in our modern lives the diets that helped our ancestors’ bodies and brains grow to modern proportions!  And, a large part of that diet includes the entire animal.

I know what I am suggesting takes time – and extra time is a luxury that not many of us have these days. But, just consider how much time we spend cleaning our guns, brushing our blinds, and telling stories after a successful hunt.  A little extra time spent carefully field dressing, effectively butchering, and trying out new recipes should be equally important.

Successfully harvesting an animal is not the end of the hunt; it is just the beginning.

If the end goal is to feed yourself and your family in the most nourishing, ethical and sustainable ways possible then field dressing with the goal of keeping as many organs as possible, butchering to keep as much meat, fat and bones as possible, cooking beautiful, delicious, satiating, nourishing foods with every part of the animal and nourishing yourself and your family with all of it are all important aspects of hunting.

Here are some small, incremental steps you can take to begin your journey:

And, we are here to help!

The Eastern Shore Food Lab, located at 236 Cannon Street directly above the Modern Stone Age Kitchen in Chestertown, is our non-profit dedicated to inspiring, educating, and empowering the community to cook more sustainably and ethically, while focusing on creating nutrient-dense, delicious foods.  We offer all sorts of classes designed to teach you how to cook from scratch in your home kitchen as accomplish everything this article advocates including nose-to-tail butchering and cooking.  We also do private classes so contact us for more information and happy hunting!

Coming Full Circle with Nourishing Traditions
Next Post:Connecting over mEAT