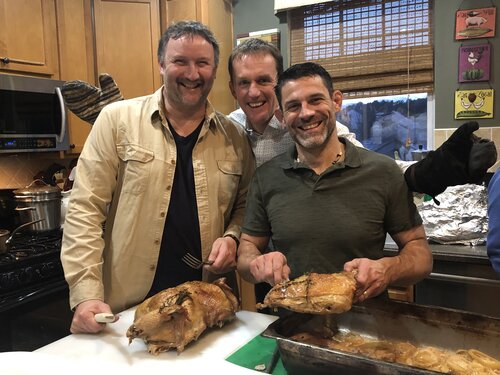 We’ve Been a Little Busy…

You are here: Home / Blog / We’ve Been a Little Busy…
by Bill

HOPE YOU HAD A WONDERFUL, BODY AND SOUL NOURISHING THANKSGIVING!

We just finished a whirlwind week of family, friends, teaching and learning, sharing, and amazing food – which explains our absence from social media over the past week or so.

This picture kind of explains how we are feeling after the non-stop adventures too!

The prep for Thanksgiving began weeks ago with harvesting wild plants, hunting, fermenting and rendering but really ramped up in the week leading up to the big day.  The Tuesday before Thanksgiving my parents came down from New Jersey. A few days before they arrived they told me that they were having difficulty finding high quality liverwurst at the market so we spent the day Wednesday making liverwurst from a pig I had butchered a few days prior.  After mixing and emulsifying the liver, meat, fat and spices we stuffed it all into two beef bungs and cooked them in a sous vide. They took one home and the other was destined to be an appetizer on Thanksgiving.

Then everyone else began to arrive!  Two years ago, we were fortunate enough to spend a year living in Ireland while I was on sabbatical, conducting research and writing a book and during that time we made lifelong friends.  Eight of those friends came to spend Thanksgiving with us. They flew into Philadelphia airport, rented cars drove down to our house together, and arrived just in time to take part in what has become a Modern Stone Age Family tradition the night before Thanksgiving and Christmas ever year – Pizza Night!

NOW, YOU MAY WONDER WHAT PIZZA HAS TO DO WITH A HEALTHY DIET, HOLIDAYS, AND WHY IS HAS BECOME A TRADITION…

Several years ago we began using the wood fired oven in the back year to cook the entirety of our holiday meals and running a fire through the oven the night before preheats the oven and gives us a chance to cook all the sourdough bread with the residual heat.  It also gives us one more excuse to gather, celebrate, and enjoy real food. The next day I get up early, run one more fire through, and then cook the turkey, then all the casseroles, and finally warm up the desserts. The ONLY food we need to cook inside is the gravy!

It is hard to imagine, but with just two armloads of wood we cooked:

Plus, since the pizzas are 100% homemade, we create the healthiest version possible with homemade cheese from high quality local milk from Nice Creamery, long fermented sourdough crust, and homemade pork sausage. We add a little crushed San Marzano tomatoes, oregano and salt to finish them off and pair it with our pizza night standby – Caesar salad topped with a mixture of sourdough breadcrumbs, parmesan cheese and olive oil toasted in the wood fired oven.

HERE IS MY COOKING SCHEDULE:

In addition to being surrounded by family and friends our Thanksgiving meal was such a success because it was filled with incredibly nourishing foods!  We cooked everything entirely from scratch and, as a result we were able to take advantage of every opportunity to make use of techniques to make the food as safe, nutrient dense and bioavailable as possible!  From fermentation to nose-to-tail this meal was the perfect combination of blending ancestral techniques and family traditional recipes – all in a modern kitchen – to produce a meal that nourished both our bodies and souls!

And, in the midst of the craziness of Thanksgiving prep some of our friends from Ireland asked for an impromptu cheese making class which we happily obliged!  And, it also resulted in fresh mozzarella and a burrata for the appetizer tray.

In the following days, we went duck hunting, deer hunting, black Friday shopping, exploring Annapolis & Philadelphia, and finally concluded with an amazing meal at the Eastern Shore Food Lab – the final project for my freshman class: Food, People and the Planet.

My students spent months conducting research and preparing a meal we called, Back to the Future. The idea was that they would recreate a 1950’s diner (remember the scene in the movie?) by using ancestral approaches to food (the past) in ways that would transform “junk food” into incredibly safe and nourishing food (the future).  These students did it all!

No two ingredients for this entire meal were put together by anyone but us – these students made:

Following the dinner our dear friend and renowned archaeologist, Seamus Caulfield, delivered an inspiring lecture titled: From Belderrig to Beijing.  Here is the abstract:

“While a young boy walking the local peat bogs with his father, Caulfield discovered what would become known as Céide Fields, a site some 6,000 years old that currently stands as the earliest dairying site in Ireland and the oldest complex field system in the world. Caulfield went on to spend his career excavating and interpreting the site, which includes stone-walled fields, homes, and megalithic tombs. He will talk about discovering the site, how growing up in the adjacent remote fishing village of Belderrig in northwest County Mayo helped him interpret it and realize its significance, and how Céide Fields has grown to receive national and international recognition.”

While busy, this is the sort of break that energizes me and I am ready to jump back in, feet first, and continue the important work of reconnecting you with your food and health.

Christina and I are busy developing content that we can provide you to do just that, so comment below and let me know what you would like to learn about this unique way of cooking

Looking into 2020, let’s learn how to eat like humans again!
Bill