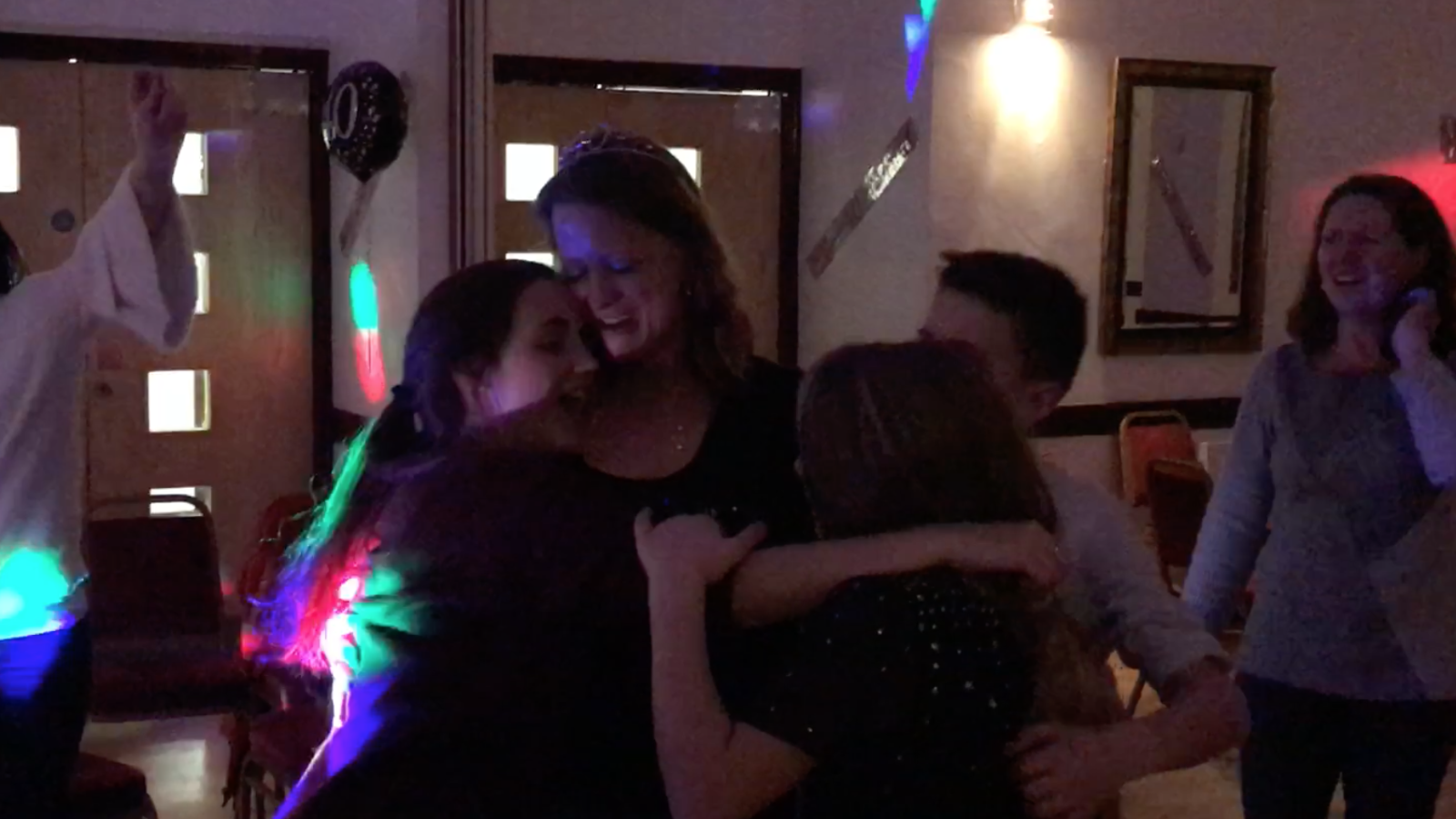 Whoa We’re Half Way There! Whoa! Livin’ on a Prayer

You are here: Home / Blog / Whoa We’re Half Way There! Whoa! Livin’ on a Prayer
by Christina

When the DJ asked me what song I wanted to end my surprise 40th birthday party with, I hesitated for just a moment and then this Jersey girl instantly yelled, “Living on a Prayer!”

As we were dancing and singing at the top of our lungs, Brianna turned to me and said, “Mom – we actually are halfway there! We’ve been in Ireland for 6 months now!” As that thought slowly sunk into my head and my gut, singing those lyrics took on a whole meaning. It’s been 6 months and yeah “we’ll make it I swear!”

So we just hit the half-way point of our year abroad!

Still can’t believe we’ve been living in Ireland for six months. When we left Maryland last August, our stomachs were full of a mix of emotions from fear to excitement to optimism to hesitation. We just kept telling the kids, to focus on the positive, be themselves, and embrace every opportunity that comes their way. I like to think that we’re not only surviving in Ireland but we’re thriving in this beautiful country. The kids have blossomed beyond our expectations and it’s been a joy to watch.

We’re not going to pretend though that there hasn’t been any bumps in the road. School was a huge adjustment. Sports were a big change. Being together all the time with no neighbors to play with was probably been the biggest adjustment of all though! No kiddos in the backyard equates to lots and lots of quality family time 😉

We started this year with our eyes wide open hopeful to create amazing memories, form lasting friendships and reconnect with one other. Very happy to say we seem to be on the path to doing just that!

Since our family has five very unique personalities and interests, we thought it would be fun to take a look back on the past six months from each person‘s perspective.

The Many Faces of Alyssa Jane

As we walked home from school one day, we asked Alyssa the two questions.  When we asked her what her favorite experience has been since moving to Ireland, she hesitated for a moment and then blurted out:

GAA or Gaelic Athletic Association includes both Gaelic football (this is a mix of soccer, volleyball, and football) and Camogie (hurling for girls) Alyssa plays for St Olaf’s and they alternate practicing Camogie and Football every other training and match. She was immediately accepted into the U10 club team of 30+ girls from 8 different schools. These means an unbelievable amount because Alyssa has never really been excited about sports before but man does she give it her all out there on the field!

We have been shocked to see her barrel right into the action, head down and swinging her stick ready to get the ball! Where did this aggressive child come from? More importantly, the encouragement she gets from her teammates and mentors (that’s Irish for coaches) has been incredibly supportive and genuine, and we know that has been a huge reason why she jumps at the chance to go to training twice a week with matches on the weekend!

When we asked her what has surprised her the most about moving to Ireland, she glanced down at the sidewalk and sheepishly said,

“MAKING SO MANY FRIENDS.  MOM – I HAVE FRIENDS FROM 8 SCHOOLS!”

You can imagine how our hearts just instantly melted upon hearing these sweet words.  It’s true though.  Since the 1st week of school, Alyssa has had playdates and birthday parties.  She instantly fit in with friends in her school and on the sports field.  Forming those initial friendships that have blossomed over the year hasn’t just been special for Alyssa but for all of us . . . especially me.  You see, the Mommas of these two Irish beauties below, are now two of my best buddies in Ireland.

Our Oldest Adventurer is Learning Lessons We Never Expected

We then posed the same two questions to Brianna, our oldest daughter.  We were confident that after careful deliberation, she would give us a well-articulated response to each question with a thesis statement and three supporting facts – at a minimum.  We couldn’t have been more wrong.  When answering what has been the biggest surprise in the 1st 6th months.  Guess what she said?

Can you feel the disgust oozing from the girl above when she opened the dressing room door as she tried on her uniform for the 1st time? You can totally understand our shock but also our understanding when she revealed to us that this has been the biggest surprise for her in Ireland!

Last year, Brianna’s nightly routine consisted of texting with her BFF to see what they were wearing the next day.  This wasn’t to make sure they matched – actually it was quite the opposite.  Brianna wanted to know if she could borrow something that her BFF wasn’t wearing and the same went for her friend.  They swapped clothes daily.  Every evening brought a trek back and forth between her BFFs house (thankfully they are our next-door neighbors) where the girls would switch clothes.  It was always a pleasant, social time, but the key word here is time! When Brianna and I did the math, we figured that she spent almost an hour a day figuring our what she was going to wear/going to borrow what she was going to wear.

SO FAR THIS YEAR ALONE BY WEARING A UNIFORM,
BRIANNA HAS SAVED 67.5 HOURS OR 2.81 DAYS OF HER 14 YEAR-OLD LIFE.
SURPRISED? YEAH! WE ALL ARE WITH THOSE NUMBERS!

For the girl who has cooked at the Italian Culinary Institute this year, visited the Berlin Wall and Christmas markets in Germany and learned how to make a sophisticated cake with a Michelin star chef, her favorite part of this year shocked both Bill and I.

SHE ABSOLUTELY LOVES HER OWN PERSONAL UNITED NATIONS.

See, all three kids are exempt from learning Irish.  Instead of heading to Irish class, Brianna makes her way to the library where she gets a class period to hang out with other students who are also exempt from Irish.  These students come from Nigeria, China, Australia, Israel, Britian, and Sweden.

Coming to an English speaking country for the year, we never considered how many other cultures we would encounter.  Brianna is experiencing this firsthand everyday during Irish class, while Billy and I hear at least 4 languages when we pick Alyssa up from school everyday.

Brianna has taken this insight a step further though.   She simply says, “everyone is nice.” It doesn’t matter what country they are from.  At school there are no cliches.  Everyone is friends. Everyone is accepted. Everyone gets along.  There is no drama.  So she’s now wondering – and so are we . . . is there a correlation with wearing uniforms??

Our Country Boy is having a change of heart

I’m gonna be honest.  If there was one child who was not exactly “excited” about this move abroad, it was definitely Billy.  He was quite happy in our house in the country, playing soccer and running into the woods to hunt, fish and explore.  The thought of moving to Ireland where he can’t hunt as easily (really not at all) plus living in a city, was not aligned with our country-boy’s priorities.  It took a few months, but Billy got quickly engrossed in rugby, football and hanging out with new friends.

So when we asked him these two questions about his 1st 6 months abroad, you can imagine our utter shock with his answer to the 1st question – what has surprised you the most about living in Ireland was . . . are you ready for this?

“I LOVE LIVING IN THE CITY!”

Wait – is this the same boy who we had full blow-outs with us about moving? The same kid who didn’t want to leave the countryside of Maryland??  OMG! How could this be possible?

He has realized the convenience of having choices right outside your door.  Whether it be countless options for eating out, the ability to hop on the LUAS and get into Dublin in just 20 minutes or even walk 7 minutes down the hill to the largest mall, Dundrum Town Center, in Ireland, to try on some new boots (cleats).

BILLY SEES ALL THIS AS CHOICES.  I SEE THIS AS INDEPENDENCE.

He has grown leaps and bounds this year because we have been able to expand opportunities by living in the city.  I mean he takes the LUAS to school everyday! I never imagined that my 12 year old son would be navigating public transportation on a daily basis in a foreign country.  Here’s another example that can’t happen back in Maryland (until he drives at least 😉 He wants to cook a new risotto for dinner at night? Simple! He just runs it by us, grabs some Euros and walks the 7 minutes to TESCO, our local supermarket, and comes back to the house and whips up a delicious masterpiece.  So curious to see how this new-found city-love impacts where he lands for college . . . should I really be thinking that far ahead though?

Mayo is actually in direct contrast to Billy’s city-loving response though, but I guess it shows who he truly is at his roots . . . a country-boy who loves to run wild out in nature, fish, hunt, and explore.  Mayo has become a 2nd home for us this year.  We were whisked away to this north-west Ireland paradise on the 4th day after we landed in Dublin.  See our dear friend, Jason O’Brien has a holiday cottage right on the water in County Mayo, and has graciously allowed us to escape to this oasis throughout the year.  As soon as Billy stepped foots onto the beautiful rolling hills and started rock-jumping by the sea, he was hooked . . . I was too honestly.  He’s able to get his fishing pole in the water up there too and hasn’t caught a thing yet, but he doesn’t care.  Just being by the water, enjoying the gorgeous rocky cliffs and cooking by the peat fire warm his country-boy heart to the core.

Here’s to the Next 6 Months!

Going into this year, we knew the kids were going to change, grow and broaden their outlook on so many different things in life.  NEVER did I expect Alyssa to be excited about playing a brand-new sport that she never even knew existed before moving to Ireland.  To think Brianna actually prefers wearing a uniform over street clothes is something else I never would have predicted, but I think the biggest shock for me as a Mom, is to hear Billy’s enjoyment with living in a city.

CAN’T WAIT TO SEE HOW THESE THREE INDEPENDENT SOULS WILL CONTINUE TO BLOW MY PRECONCEIVED NOTIONS OF WHO THEY ARE BECOMING OVER THE NEXT 6 MONTHS!