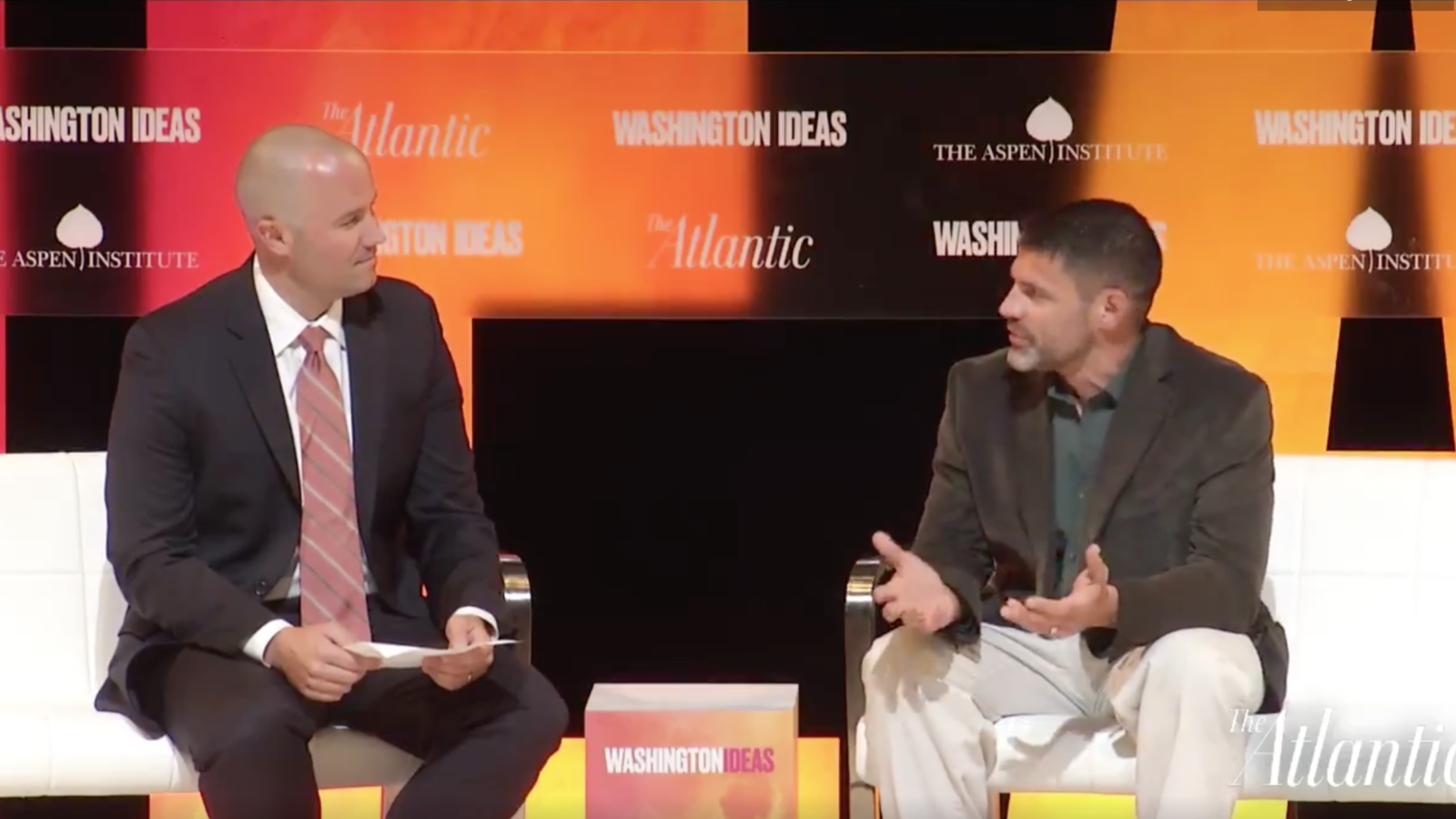 You are here: Home / Blog / Washington Ideas Interview
by Bill

Sharing Food Insight through an Experimental Archaeology Lens at Washington Ideas . . . this was by far the biggest event I ever had the opportunity at which to speak!

I was invited last spring to take part in this year’s Washington Ideas event.  I was honored and assumed that it had something to do with the interview about my teaching that had recently appeared in the Atlantic Monthly.  Once I did a little digging to find out more about the event I learned that it is an annual event put on by the Atlantic and the Aspen Institute where they advertise that they convene “the nation’s leaders in politics, business, health, scient, technology, arts, culture and journalism for three days of can’t miss conversation and connections.”

Even though I knew I would be in Dublin during that time I knew I couldn’t miss this opportunity speak about Washington College, the Eastern Shore Food Lab, and the Food Evolutions project.  I told the organizers I would be honored to attend!

In the weeks leading up to Washington Ideas, I began to get a little nervous.  Since I had never attended one of the events in the past, I did not know what to expect nor how to prepare.  I later learned that it was just a conversation between a reporter from the Atlantic and me – that there was no need to prepare.  This is not what I am used to and I could not fathom going on stage to talk to such a large and educated audience without first preparing.

To attend the event I flew from Dublin to Dulles the night before.  I was staying with my good friend, food writer and reporter, Bonny Wolf that night and was really looking forward to catching up with her on all of the various projects we were currently both pursuing.  I finally arrived at her house after a bus ride and transfer to the Metro since there is absolutely no easy way to get into DC from Dulles.

The next day I woke up to a breakfast of wild pawpaws and some toast made with local bread.  Bonny had obtained a few pawpaws to give me a little taste of home which I could not get anywhere else.  And, she nailed it!  Pawpaws (Asimina triloba) is the largest fruit native to Eastern North America and is one of my favorite fruits.  When ripe I feel it tastes of a combination of banana custard and mango and these were perfectly ripe.  Nothing like a little nostalgic terroir to start your day when traveling!

After we finished breakfast I left for the event – in order to get there I needed to walk to the metro station, took the train, and then I had to walk for about 20 minutes to get there.  As I approached I began to realize how massive this event really is!  Signs that read, Washington Ideas were in all the windows larger than life and banners announcing the event were on the light poles.  Everywhere, people were walking around with Washington Ideas “bling” in the form of folders, backpacks, etc.

When I arrived I walked into the registration area and was escorted to the “green room” where I could wait until it was my turn.  When I went to pick up my name tag I noticed that Madeleine Albright’s was sitting atop a stack waiting to be distributed for tomorrow’s line up.

I couldn’t believe I was speaking amongst the likes of Madeleine Albright, Ken Burns, and a host of amazing and talented people.

Everything ran like clockwork and I was thoroughly impressed.  In the green room I met Ross Anderson, senior editor of the Atlantic who was going to be interviewing me on stage.  We were called backstage to be mic’d at the precise time to get mic’d and briefed on stage entrance and exit.  Right before we went on stage Ross and I got to meet and took a picture with the Teddy Roosevelt mascot of the Nationals who was brought to the event to lead a 5 minutes stretch for the attendees who had been sitting at that point for three hours without moving!

We were then introduced on stage, I took my place on the couch, and the interview progressed.  Ross did an excellent job set the stage and asking me questions.  15 minutes later I was back off stage and it was over.

I was thrilled beyond belief that I had the opportunity and, even in the short 15 minutes, a chance to send some of my impassioned message with the audience about teaching and learning, human diet and health, and building connections.

I wish it were longer, but it was exactly what we all needed to keep the food conversation continuing, and this provided excellent momentum for the Eastern Shore Food Lab at Washington College!

Read the Article that Started it All