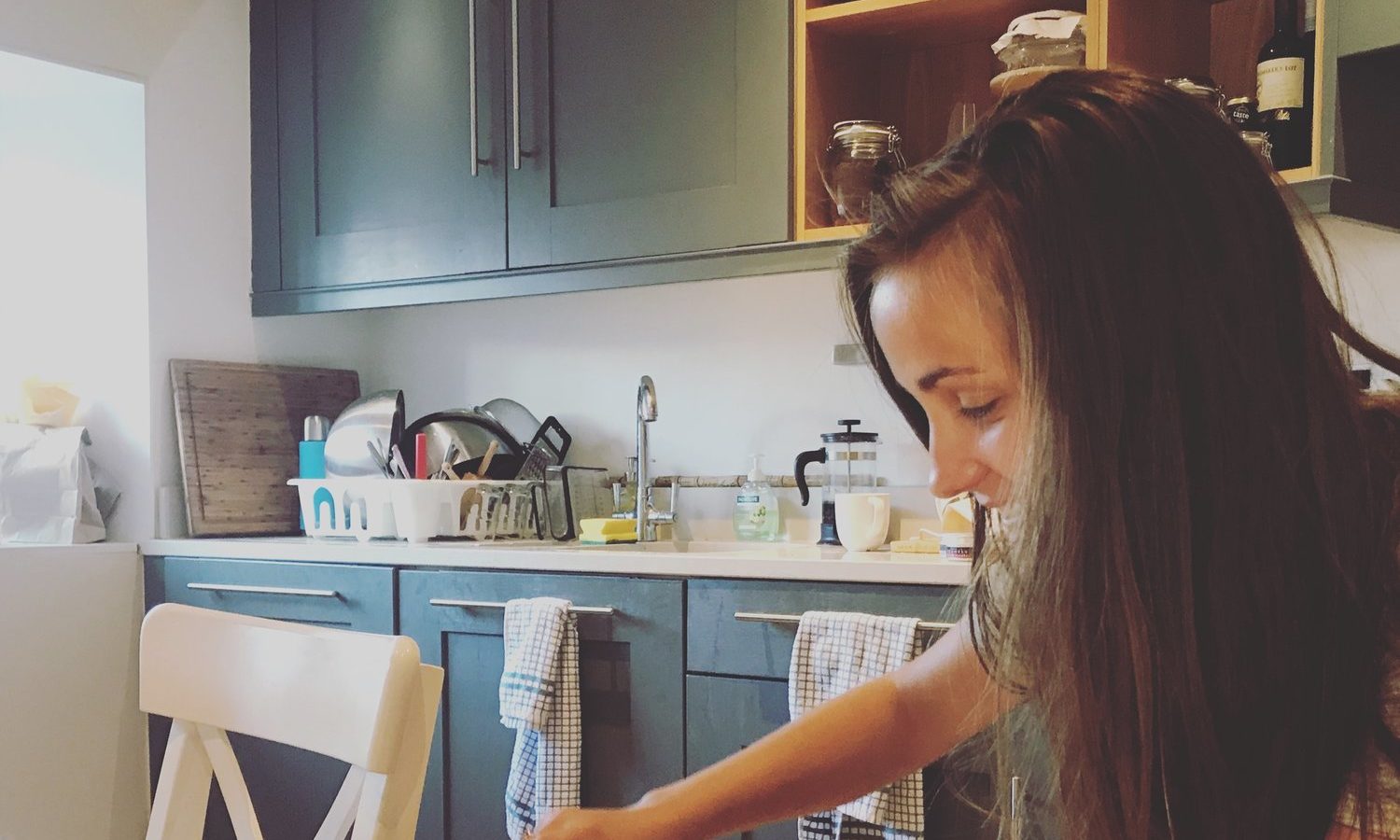 Beyond Baking with Kevin Thorton

You are here: Home / Blog / Beyond Baking with Kevin Thorton
by Bill

Brianna has an insatiable appetite for good – I mean really good – chocolate and well,  . . . just about anything sweet.

She knows that in order for something containing sugar to be allowed in our house it has to meet three requirements:

This has provided a niche in our household for someone to learn to make high quality desserts and, even at an early age, Brianna has wholeheartedly taken on the responsibility to fill that niche and has become incredibly skilled.

It wasn’t always this way.

In fact, allowing anything sweet in our house used to be an incredibly rare occasion.  When the kids were very young I made it my personal mission to make sure that the kids were fed best quality diets we could provide them.

For the first few years I interpreted this to mean that I should simultaneously serve them nutrient dense foods and keep them completely sheltered from anything sweet or considered, “junk.”  After several years, I came to the realization that I was driving myself and everyone else around me crazy.

The mental and physical energy that that went into tracking down high-quality raw ingredients, making practically everything they ate entirely from scratch, and also serving as the food police so that they did not get any junk in our house, their grandparents’ houses, nor their friends’ houses was all consuming.

I kept convincing myself that no matter how exhausting and stressful it had become “that it was worth it.”  I couldn’t have been more naïve – and this is precisely where this post is applicable to the food evolutions project.

Certainly, our ancestors only had access to very limited simple carbohydrates.  And, when in the rare cases that they did acquire sweet things in nature it was typically in small quantities and the consumption of these natural sweeteners delivered other beneficial nutrients that made eating them worthwhile.  As a result of the use of fossil fuels, government subsidies, and marketing strategies that play on our most primal of senses we have created an entirely new set of problems due to the overconsumption of simple carbohydrates, since most of the sweet things we consume are refined to the point of absurdity they are void of the added benefit of ingesting the beneficial nutrients such as probiotics, vitamins or minerals that our ancestors did when they ate natural sweet foods such as wild fruits or raw honey.  So, since our bodies are essentially identical to what they were 300,000 years ago, I was correct that from a biological stance my kids did not need these sugary foods in their bodies.

However, what I came to realize during these intense years that looking at this dilemma purely from a biological viewpoint was short sighted.  I also needed to account for the fact that today we are living in a very different place culturally.

The acts of procuring, processing, and consuming food are, at their hearts, very cultural activities bound up and defined by all sorts of ritual, tradition, and sense of identity defined in a number of different contexts.  We cannot completely escape the modern dietary landscape (no matter how much I would like to) nor, do I now believe we should.  Instead, what we need to do is find a way to make it all work and, influence the relationship my kids have with sugary foods to the point where it is a meaningful, conscious relationship and it also allows them to learn and consume some quality food then it is worth it.

So, I decided to back off and focus on one aspect of my earlier two-pronged approach:

It was more important to me in ensure that my kids were getting the nutrient dense food their growing bodies needed than it was to block their access to all other foods to the point of absurdity that I was taking it.  If they also consumed some additional food I was not thrilled with, then so be it.

I COULD LIVE WITH THAT.

After all, a healthy relationship with food is about much more than merely nutrition.  The act of eating and sharing food is uniquely human and thus very cultural.  Since then, we have all become less stressed around the house….

Other than what we now fondly refer to as “emergency chocolate” – a stash of high quality chocolate we have hidden on a high shelf for those occasional emergencies that are really more a mental break than anything else – we strive to ensure that all sweets in the house adhere to the three aforementioned “guidelines.”

The act of filling the kids with high quality, nutrient dense food combined with this approach to sweets have turned out to be a great strategy because it works to limit the amount of sweets in the house, provides another reason for the kids to actively participate in the kitchen learning to cook, and places value on what they are eating because they know the immense amount of work and love that goes in to creating it – even if it contained some sort of sugar.  I also am comforted, a little, by knowing that homemade desserts made from high quality raw materials are void of artificial and harmful ingredients and do provide some beneficial nutrition such as high-quality animal fats, proteins, and even other magnificent nutrients such as gelatin.

I do have to admit that most of what they have been able to learn, beyond the basics, they have done on their own.  My knowledge surrounding cakes, pastries, and other sweet foods is limited.  Brianna has taken her cake and pastry cooking to an entirely new level and, that is why when I had the opportunity to bring Brianna to Michelin Star chef, Kevin Thornton to take a macaron and petit fours class I jumped at the chance!

The courses started precisely at 10:00 am with fresh cup of coffee (and tea for Brianna!) and a discussion about what we were going to do in the class.  It was then that Kevin announced he had a surprise for Brianna.  Since it was her birthday that in addition to the macarons and petit fours they were going to bake a birthday cake – together!  We then donned aprons which proudly boasted the words “Kevin Thornton KOOKS” across the front and got to work.

The six-hour class that insued was incredible and filled with so many aspects of cooking to which I have never before been exposed.  And, I could certainly go on for pages about all of the things that we learned.  However, I will only focus on a few of the things about the day that struck me the most.

First, were the ingredients.

I am not referring to the flour and eggs and sugar – no, of course these were of the highest quality.  I am referring to the ingredients that Kevin had produced himself.  Some of these like the raspberry coulis he began that day, others he started days or weeks ago such as the sugar and egg white coated dried rose petals and blueberries.  Some, like the ingredients that filled the jars on wall of the kitchen – Brianna’s favorite part of the room because it was so visually appealing – he had been drying, curing or fermenting for months and, in some cases even years!  We used vanilla sugar he made by burying the vanilla pods, the by-product of removing the seeds to flavor his desserts, in sugar and sets aside to infuse the sugar with all of the essence of the vanilla.

At one point during the day Kevin pointed to the wall, a wall that represented an immense about of knowledge and work, and noted how it takes a long time to build up your stock but, when you do you have the ingredients on hand to make incredible food.  This wall also represents Kevin’s stance on zero waste in the kitchen.  Many of the things on this wall he uses to transform ordinary food into the extraordinary – all within reach whenever he needs them – are recycled by-products of other things.  The vanilla sugar is one example.  Instead of throwing away the empty pods he uses them to make something else.  Another example was when the first batch of macarons did not turn out exactly right.  Instead of throwing them out, he informed us that he was going to dehydrate them, crumble them up, and store them until he can use the “macaron crumble” in something else.  I am sure that batch of dried, pulverized macarons that someone else would has thrown away now sits proudly in a jar on that wall.

Little things like how he holds a whisk or, the exact motion he uses with his hand as he gentle spins the whisk as he is folding in egg whites or whipped cream.  Or, how he kept melted chocolate warm by placing it in warmer tray in the bottom of the oven between uses.  Kevin also showed us how to seamlessly move around the kitchen, multitask, and address problems (which always arise in the kitchen) gracefully and without skipping a beat.  At one point the whipped cream became over-whipped and he simply grabbed the bowl, poured in a tiny bit of fresh cream and whisked it in working to smooth it down and loosen it up a bit.  I am embarrassed to admit that it was today I realized I had been holding a whisk the wrong way my entire life!

The rest of the day was spent making sponge cake, gelatins, coulis’, garnishes, and macarons.  What I took from the course when I left was an appreciation for all that goes into REAL desserts – desserts with integrity.  These desserts require a ton of skill, laser precision in measuring and execution of technique, and the best ingredients available.  In addition to intense learning Brianna spent the day creating her own birthday cake with an amazing chef – the shear amount of different skills including making cake to working with sheet gelatin to working with chocolate – was impressive.  And, she did it all under Kevin’s tutelage.

Making something entirely from scratch that you are going to feed someone else instills a sense of ownership and pride that is difficult to match.  And, when she left Kevin’s Brianna did not just carry a gorgeous cake out the door, down the street, and on the Luas home.

No, that cake represented a day spent creating a connection with a true master, learning and executing a new set of skills, and all of the stories and laughter we shared.

Thank you for an amazing day!

That is why this post is relevant to the Food Evolutions project.